“Hardide-T was everything I wanted in a hard coating. With test results showing almost no wear on the deflector plate, it means I can expect not to touch it for up to five years. Hardide-T offers a far superior level of initial wear resistance, a continued level of protection over time and a many-fold extension of component life.”

Royal Mail is the UK’s designated universal postal service provider. It has 21 mail centres in the UK, containing 69 letter sorting machines that each process more than 40,000 items per hour for 20 hours per day. Each sorting machine has two deflector plates that are part of an assembly that takes one letter at a time off the bundle to enable each address to be read individually.

The coarse nature of paper envelopes means that the plates, manufactured in 304 stainless steel, are subject to continuous levels of subtle abrasive wear. This was resulting in burrs forming on the trailing edge of the plates which was causing Royal Mail both replacement cost and safety concerns. They were replacing the plates every 4-6 months to prevent burring and this quickly became costly due to machine downtime and the purchasing of new parts. Furthermore, the plates were causing the potential for injury of the machine operators if they drew a hand across a trailing edge on which a burr had formed.

Royal Mail decided to look for an alternative material for the deflector plates, and three pairs (front and back) of blades were installed in sorting equipment for a six month trial period. All were 304 stainless steel with one pair being Hard Chrome (HCr) plated, one coated with Hardide-T CVD tungsten carbide coating and one being an uncoated OEM part. The Hardide-T coated parts processed 50% more items than the HCr plated part and 255% more items than the OEM parts. In all three sets, the front blade was more affected than the rear so comparative analysis was carried out on the front blades to analyse the more severe wear effects.

A visual examination showed that the highest levels of wear were apparent on the OEM part where the material had completely broken down. The HCr plated part showed some signs of wear and the Hardide-T coated part looked as new, despite the much higher item throughput. 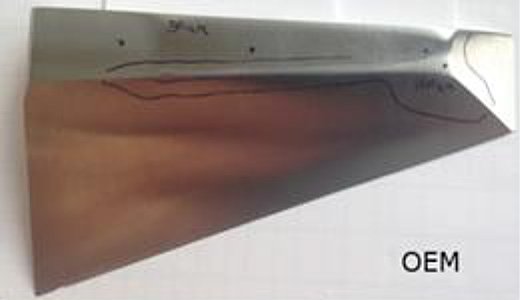 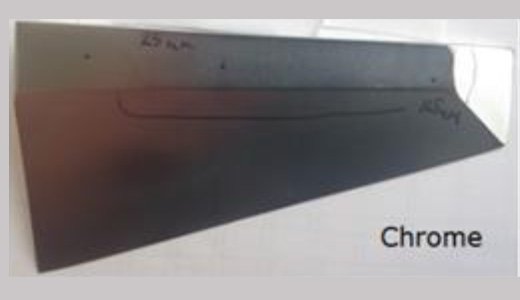 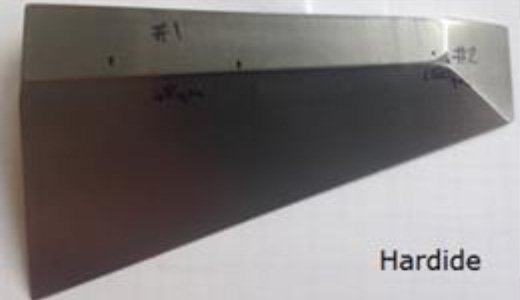 As evident from the visual examination, the ‘wear-dip’ sections showed substantial loss of material from the OEM sample, the vertex being completely worn away between the side face and the top face. The HCr sample showed less significant wear with a 1mm wide portion of the plating having been eroded producing a flat across the former apex. Energy Dispersive X-Ray (EDX) analysis and imagery clearly showed the removal of HCr in that area. The Hardide-T coated sample exhibited only a rounding off of the edge with a loss of approximately 5 microns of the coating leaving 26 microns in place. It is not unusual to remove 4-5 microns in the post-coat polishing of Hardide coating which mean a potentially even lower wear rate of microns per million of mail items.

Following the wear test results, Royal Mail did a price comparison and concluded that the price differential was identical between the cost of replacing the OEM part every six months and the cost of coating the parts with Hardide-T and replacing them every five – seven years. Royal Mail chose the Hardide-T solution to solve the burring issue and eliminate the need for a maintenance plan for the deflector plates. Royal Mail expect to fit all their letter sorting machines in the UK with Hardide-coated deflector plates in time for Christmas 2017.

Royal Mail and Hardide Coatings are currently working on the development and testing of two more high-wear parts for sorting machine applications.

Any cookies that may not be particularly necessary for the website to function and is used specifically to collect user personal data via analytics, ads, other embedded contents are termed as non-necessary cookies. It is mandatory to procure user consent prior to running these cookies on your website.